On The Table Read, “the best entertainment magazine in the UK“, Gibson Garage Festival kicks off an epic celebration for their one year anniversary, and donate $30,000 to the National Museum of African American Music.

For 128 years, Gibson, the iconic American instrument brand has shaped sound across generations genres, and genders, and has emerged the most relevant, played, and loved guitar brand around the world.

Last week, top music artists, Nashville luminaries and the Gibson team, gathered kick off an epic celebration for the one-year anniversary of the Gibson Garage–the ultimate guitar experience and music destination in the heart of downtown Nashville, Music City USA.

Music fans lined up all week long for Gibson Garage Fest to enjoy live music from a diverse range of top artists, CMA performers, special events, and daily giveaways at the Garage which has become Nashville’s best, must-see music attraction.

On Thursday, June 9–Les Paul’s birthday and the official one-year mark of the opening of the Gibson Garage—Darius Rucker visited the Gibson Garage stage for a special donation event with Gibson Gives–the philanthropic arm of Gibson. Gibson Gives donated $30,000 to the National Museum of African American Music (NMAAM) and its fund for music education while the country superstar thrilled the packed crowd with an intimate acoustic performance of his hit songs.

“I couldn’t think of a better place to have an African American music museum than Nashville” says Darius Rucker. “Everybody in the world, should go see NMAAM, it’s such an important place. For as long as I can remember I’ve been playing Gibson’s, and what they’re doing with Gibson Gives is a great thing and now they’re partnered with the NMAAM, it’s a perfect fit. I’m so proud to be a part of all of it.”

“One year ago, we couldn’t have imagined the impact the Gibson Garage would have on guitar fans in music city and around the world,” says James “JC” Curleigh, President and CEO of Gibson Brands. “It’s the best compliment to hear artists say that the Garage has set a new benchmark and is yet another massive step in the right direction for Gibson.” 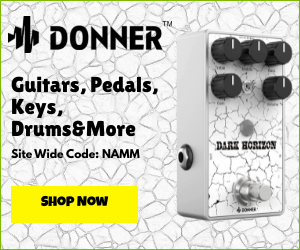 One year after opening its doors, the all-new Gibson Garage is the place to explore Gibson’s past, present, and future. People from around the world visit the Gibson Garage where fans can experience live music, play more than 400 guitars, plug-in and play all things Gibson, Epiphone, Kramer, MESA/Boogie, Maestro, andKRK. Inside the Garage, catch an icon on the stage, try the full line of electric and acoustic guitars, design a dream custom guitar, and watch a taping of the award-winning Gibson TV series.

The Garage is the place to explore Gibson’s rich, 128-year music history with captivating, interactive storytelling and memorabilia displays. At the Gibson Garage, fans can take a piece of history home with one-of-a-kind, in-store offers on limited-edition guitars, instruments, gear, accessories, and exclusive Gibson apparel. Whether a seasoned professional musician, a casual guitar player, a beginner, or simply a music fan, the Gibson Garage is open to all. Take a tour of the Gibson Garage on Gibson TV, HERE.

Check out what artists are saying about the all-new Gibson Garage:

“The Gibson Garage is one of the coolest places I’ve ever visited” says SLASH. “I am blown away by the attention to detail. & the totally immersive nature of the place.”

“I was blown away with The Gibson Garage, it’s the ultimate guitar experience everyone should see”, says Kirk Hammett, lead guitarist of Metallica.

“I love the Gibson Garage! It’s one of the best guitar and music experience places I’ve ever been to” says Adam Jones of Tool. “A store where you can buy quality custom guitars or build your own custom designs. A venue where you can attend live music and VIP events, and a museum of sorts displaying historic mementos of Gibson’s iconic legacy. I can see why it’s become one of the ultimate music destinations in Nashville!”

CMA performer and country singer-songwriter Tiera adds, “When I walked into the Gibson Garage it was so cool seeing all of the guitars on the walls and sitting down and playing my Gibson for the first time was truly, I’m not being dramatic, it was magical because I played a couple guitars before that and none of them have felt the way my Gibson played and plugging it in, was exactly what I’ve been wanting for so long. Playing the Gibson Garage stage was a special experience.”

Blues phenom Marcus King adds, “Whenever a guitar player walks into a place like the Gibson Garage, no matter how long you’ve been doing it, walking in to a room with this many wonderful guitars and this many wonderful people, it’s always going to take you back a little bit to that first time you held a Gibson guitar, the first time you opened the case for a Gibson guitar, and that feeling, it makes you feel like a kid again when you walk into the Gibson Garage. It is a beautiful feeling and I hope I can share it with you again soon. You gotta check out the Gibson Garage. I mean it’s just like when you go to Memphis you’ve got to check out Graceland, and you’ve got to go to Pearl’s Oyster House and you gotta come to the Gibson Garage while you’re in Nashville. It’s just one of them things.”

“All roads lead to the Gibson Garage. Whether you are seasoned artist, a beginner, a fan or anywhere in between, this place is a sanctuary” says Lzzy Hale of Halestorm. “It’s a place where you can feel the history of the legends and be inspired by the ever evolving power of music.”

“Stepping foot in here for the first time was awesome I felt like a kid in a candy shop,” says CMA performer and rising country star Ernest. “All the super cool guitars, the smell is amazing. Getting to sit around and play them it’s always fun. Playing the Garage is awesome, I loved the whole backdrop looking at the guitars on rotation and playing such a great Gibson J-45 guitar which sounds incredible. My first guitar was a Kramer, a girl that played for my Dad’s high school basketball team, her Dad worked at the factory here in Nashville and he knew I was looking for a guitar, so I bought a Candy Apple Red Kramer and now to have my first legit acoustic, a Gibson J-45, I’m pumped to be a part of the team.”

“They’ve got Keith Richards on the wall and Dave Grohl,” says country singer-songwriter Hannah Dasher. “I did my makeup in the vanity room, it was beautiful, the mirror it’s so well-lit. And then the guitars on the walls and you can pick-em up, and play-em, and they probably wouldn’t miss one if I snuck away with it. I was tickled to play the Gibson Garage Fest because it was the first festival I’ve played that’s in air conditioning. Not to mention it’s so fancy in here. It looks great, I love it and all the staff is just a classy team, class acts. The sound was great, don’t tell Fender I’m here.”

“The Gibson Garage in Nashville is incredible, all the spaces inside contribute to what this entire brand represents and it’s so cool to have it all under one roof” says pop artist PHANGS. “I had the privilege to perform here a couple times and did an EP release here that was so fun, we used their big wall of images and I got to play this Kramer guitar. Being able to bring people to a place that’s not a stereotypical venue and let them interact with what music does is so special; the Gibson Garage is a special place that doesn’t exist anywhere else.”

“I’d heard only good things about the Gibson Garage and if you’re hearing those good things now you definitely have to come on in here to experience it for yourself” adds country musician and actor Charles Esten. “I’m such a fan of Gibson in general, but you need a place like this that serves it up exactly as it should be. It’s a little bit of the church of Gibson here so if you worship them like so many, come on in here and see them displayed so well and treated so right. It a fantastic place to get to play too. Got to sing a little bit with my buddy Eric Paslay and there was a great crowd out there, I’m guessing came all the way out to Nashville, and out of all the things they could be doing during this CMA Fest, they find themselves at the Gibson Garage, and it’s not a surprise to me.  I’m gonna be back and you should come here too.”

“The Gibson Garage embodies everything a player including beginners, would ever want” adds Rex Brown of Pantera. “It’s the Holy Grail of guitars, every model is on display and available to be played, the ultimate collection of Killer’s! And in the event that your favorite model isn’t on their Vulgar Display trusses, you can pick out the woods of your very own Custom Model! There’s simply not a cooler experience than the Gibson Garage!”

About Gibson and Gibson Gives:

Gibson, the iconic American instrument brand, has shaped the sounds of generations of musicians and music lovers across genres for 128 years. Founded in 1894 and headquartered in Nashville, TN, Gibson Brands has a legacy of world-class craftsmanship, legendary music partnerships, and progressive product evolution that is unrivaled among musical instrument companies.

The Gibson Brands portfolio includes Gibson, the leading guitar brand, as well as many of the most beloved and recognizable music brands, including Epiphone, which has been on every stage since 1873, Kramer, the original MADE TO ROCK HARD guitar brand, MESA/Boogie, the home of tone, KRK, behind great music for over 30 years, and Maestro, the founder of effect pedals. Gibson guitars and gear have been played on stage by countless musical icons in every genre of music, and Gibson Brands is dedicated to quality, innovation, and sound excellence so music lovers for generations to come will continue to experience music shaped by Gibson Brands.

Gibson has a strong focus on supporting the global music community through the philanthropic arm of Gibson Gives. The mission of Gibson Gives is to create, develop and support non-profit organizations in their efforts to advance musicians, youth-focused education, music, and wellness initiatives. 100% of all donations to and from Gibson Gives–a501(c)(3) organization–go towards giving the gift of music.

In the last three years, Gibson Gives has raised over $3.5 million dollars worldwide through its mission. For a deeper look inside the history of Gibson, plan a trip to downtown Nashville, to visit the Gibson Garage. At the Gibson Garage—the all-new flagship store–music lovers can experience live performances, design a dream guitar, catch a taping of the award-winning Gibson TV series, and explore Gibson’s 128-year music history with captivating, interactive storytelling and memorabilia displays, inside the historic space.